The Vietnamese are in love with this thing called tea. They drink it everywhere and at any time: at formal meetings, after meals, at weddings and funerals. 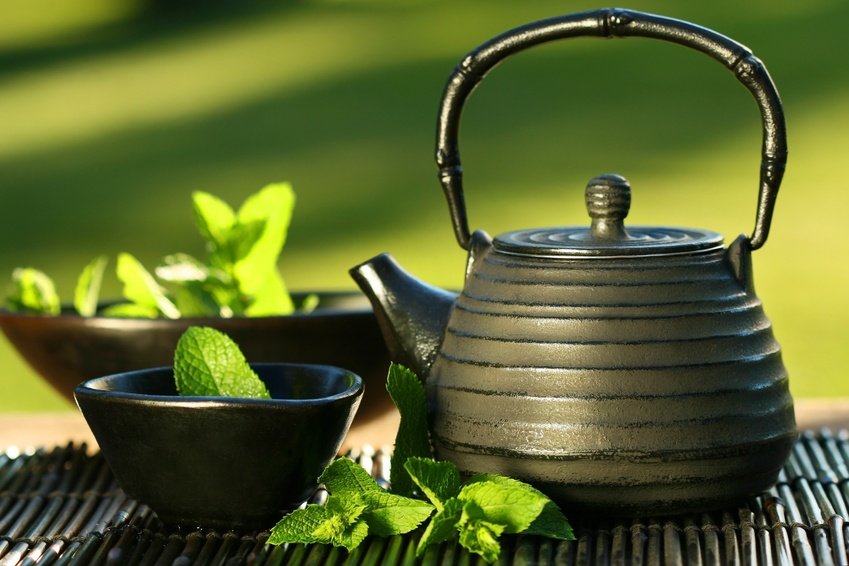 They place it on altars as an offering to their ancestors. But tea drinking is not a recent trend in Viet Nam. It has an ancient history, though it remains as important to the Vietnamese today as it was in the past.

Tea: From History And Poetry to Daily Life

Vietnam is one of the largest and oldest tea-producing countries in the world. A biochemical survey conducted by Russian Professor Daemygzagza in 1979 indicates that the tea trees found along Viet Nam’s northern border with China contain the oldest genetic structure known to exist. This is an indication that the inhabitants of what is today Viet Nam may have been the first to taste one of the world’s most popular beverages.

The Vietnamese have been growing tea for over 2,000 years. However, the history of Vietnamese tea has not been as well recorded as that of the Chinese or Japanese. The fact that in ancient times the Japanese loved teapots and cups made by Vietnamese craftsmen points to the existence of an early tea culture in the country. Some of the history of this tea culture can be illuminated by examining references made to the beverage in poetry and popular songs.

As early as the 11th  century, tea was used as a symbol to convey the essence of Buddhism. The following is an excerpt from an instructional book written by the Buddhist monk Vien Chieu (999-1091):

Student: What is the essence of Buddhism?

Monk: A gift for a friend coming from thousands of miles away.

Simply a smile with a pot of tea

During the period of the Tran Dynasty from the 13th to early 15th  century, tea assumed a philosophical value for the Vietnamese. In a poem dedicated to King Tran Anh Tong, Chu Van An, a Vietnamese scholar who is sometimes worshipped alongside Confucius in temples, mentions tea as a source of spiritual purity. Many Vietnamese scholars of this period sought to escape from the petty concerns of life in the mandar-inate, and to achieve enlightenment and peace of mind through reading ancient Chinese texts and consuming tea. Among these were Thang Huu and Tran Nguyen fian. Thang Huu, a wise tea-tippling Buddhist monk who was made a mandarin by a Tran King, scorned wealth and power for a simpler and more spiritual existence Tran Nguyen Dan, after witnessing the cruel behavior of a senior mandarin named Ho Quy Ly, expressed his discontent in the following verse:

After the Royal Court session, I drank tea to cure my sadness. And used worn-out textbooks to teach children.

Tea was also a part of diplomatic protocol, used by figures in Vietnamese history to  impress  foreign dignitaries. At a farewell party for Nguu Lang (Niu Liang), a special envoy of the Ming Court in China, Tran Phu, a high-ranking Vietnamese mandarin improvised a verse to express the goodwill of the Vietnamese Court. It reads:

The Senior Mandarin of the southern country is not skilful in verse-making.

And has only simple tea to see off the visitors.

In spite of the simple farewell party, Nguu Lang was very impressed and predicted that Tran Phu would become a Iran King. Indeed, after defeating rebel armies, Tran Phu later did become king and restored the Tran Dynasty.

In the 1 5th century, the Vietnamese polymath Nguyen Trai (1380-1442): his 600th  anniversary was celebrated by UNESCO in 1980), lived as a hermit, renouncing the outside world for a life of “tea, poetry and the moon”. In the moonlight, he used to drink Buddhist hong mai tea leaves steeped in snow-white water and searched his soul for faults in his character and his life.

While tea has a special philosophical value for scholars and a long tradition in Vietnamese history, it has its own place today in the lives of ordinary people living in cities and in the countryside alike. Ordinary people cannot afford to buy expensive tea, so they grow their own. Tea is used to bind people together; in the countryside, the peasant often invites his neighbor round for a chat over a cup of tea.

Drinking tea is considered a means to improve one’s character, and to help polish one’s manners. Indeed, a person’s character can be assessed by his or her tea drinking habits. Vietnamese consider those who drink concentrated tea to be finely-mannered. Those who can pour tea into bowls arranged in a circle using a coconut scoop without spilling a drop will certainly enjoy the admiration of their tea-drinking peers.

In the Tale of Kieu, written by Nguyen Du, Viet Nam’ s greatest poet (1765-1820), tea helps the jealous HoanThuto control her anger. Catching her husband together with his beautiful mistress Thuy Kieu, Hoan Thu shows her refinement by calming her jealous rage with a cup of tea, and then following her husband home.

Tea is to this day often used to calm down an angry friend: Vietnamese people engaged in heated quarrels are offered a cup of tea by their friends to help dilute their anger.

The Vietnamese like to mix tea with flowers to make it more aromatic. Each variety of tea is combined with a particular kind of flower: che man with chrysanthemum; che bup with hoa soi flowers; high quality che man and che bup with lotus, narcissus or jasmine. Some connoisseurs go so far as to row out to the middle of a pond to place small amounts of tea inside lotus buds in order to perfume it. Lord Trinh Sam (18th  century) only used lotuses from the lake of the Mandarin Ngo Dinh Chat to perfume the tea he shared with his beloved concubine Dang Thi Hue.

Tea has been valued and enjoyed so much in Viet Nam because the Vietnamese are aware of its special qualities. The patriotic Vietnamese scholar Dang Huy Tru (1825-1874) extolled tea in the following way:

The garden is lush with green tea

It is squeezed, dried and stored for relieving thirst.

As a beverage that separates the yin and the yang.

In summer it reduces the heat with its bitter and sweet taste.

It can cure stomachaches. ..

With its seemingly infinite uses, there is more in a simple cup of tea than one might expect

So What is Tea?

Tea is scientifically known as camellia sinensis. This evergreen plant, with its small white blossoms, is native to the forests of northern Viet Nam, northern India, northern Burma and southern China. Today, it is harvested in over 30 countries around the world. These regions form a band around the earth within 30 degrees latitude of the equator and are as diverse as Argentina, China, Papua New Guinea and Turkey.

The tea plant is extremely versatile and hardy. It is known to grow, albeit slowly, at 3,000 meters in the foothills of the Himalayas. It can survive four months of snow in Turkey, and tolerate the northern latitudes of England (though there it loses its leaves every win-ter). Commercial cultivation, however, is limited to those areas in which the climate makes tea production financially viable.

The final flavor, texture, color and fragrance of tea varies according to climate, altitude, type of bush, and methods of processing and blending. As a result, no two teas are exactly the same, even if they are from the same area or plantation. Generally, tea prospers with a combination of sunshine, warmth and good levels of rainfall, all of which Viet Nam enjoys in abundance. Different varieties flourish under different conditions, but certain conditions are generally better for tea cultivation than others. Tea seems to grow  best at  around 25 degrees Celsius,  but has difficulties when  the temperature is below 13 degrees.The   amount of annual rainfall necessary for growing tea is between 1,050 and  2,000  millimeters. While a fairly consistent temperature is preferable, some believe that the greater  disparity between day and night time temperatures found in the mountains produces a more aromatic tea. Regardless, between 200 and 250 hours of sunlight are needed  per month for optimal cultivation. The tea bush is mostly a highland, or at least midland, crop, which grows best between 600 and 2,000 meters above sea level. Some believe that the higher the elevation, the milder and more fragrant the tea, while tea grown at lower elevations is said to have a heavier and stronger taste. These differences, however, may have more to do with the varieties of tea grown at the various elevations than the elevation itself. It has also been said that a lighter, sandier soil tends to produce a more fragrant tea. While all of this is difficult to verify, it is fairly clear that tea grows best in soil with a pH level of 5.

In Viet Nam wild tea plants have been known to reach heights of nearly 15 meters and boast diameters of two meters. It is said that in earlier times, monkeys were used to collect tea leave from in accessible places. Sometimes these monkeys were specifically trained for the task. Alternately, monkeys encountered frolicking among tea trees were taunted with stones until they became angered into breaking off tea branches, and throwing them down at their delighted tormentors.

Today, the trees are usually pruned into bushes about one meter high, the ideal picking level to make the leaves accessible. Pruning generally occurs in the winter months after the last harvest. In many places, tea is grown on estates averaging 500 hectares, with about 1 5,000 bushes per hectare. Each hectare produces about vie tons of leaves per year depending on the conditions. The bushes are usually planted on hillsides in rows horizontal to the slope. In Viet Nam, tea bushes grow almost entirely on hillsides to allow other crops, primarily rice, to be grown in the low lands. Each bush produces around 125 grams of dried tea per year, which is equivalent to about 40 tea bags. A tea bush has a life span of 40 to 70 years, and begins to produce tea after the first five years of its life. Such longevity is of value in tropical or semitropical countries where rates of soil erosion are high, because the bushes provide stable and extensive ground cover, reduce evaporation, and stabilize the nutrients in the soil.

Environmentally, tea helps maintain the quality of the land for many years. As with all crops, tea has to be managed and research continues into improving productivity, quality and resistance to disease.

10 of the best contemporary art spaces in south-east Asia