Home > Travel Blog > Adventure > What Vietnam Was Like, For Me

It was my first step into Asia.

“What kind of travel blogger are you?’ – Jen, when I told her.

From working at gapyear.com and being around travellers all day every day, I’d heard so much about Vietnam. So when me and my boyfriend were invited to a wedding in Ho Chi Minh City, we packed our bags at the chance. Well, after me declaring that it was ‘quite the decadent choice of location’, but y’know, she’s Vietnamese, they live in London, why not go back to her roots for a few days? I planned, a lot. I researched what my fellow travel bloggers had to say about Vietnam to come up with an awesome two-week itinerary and eventually I had a clear picture in my mind of what I thought I was about to experience.

I imagined it to be crazy. Big billboards, shanty towns, loads of people, sweaty sun, street markets, no order whatsoever and either filled with friendly people, or everyone was out to get me, so say the on-location blogger reports.

The roads of Vietnam

I can pinpoint when the craziness of Ho Chi Minh City hit me, almost literally. We’d been there about 30 minutes, but only out of the hotel about 10. We were standing on the island just outside the Ben Thanh Market with traffic rushing past to every side of us, in front and behind. I braved stepping out onto the road a bit before an army of motorcyclists came right for me. How the hell, were we going to get across the road? 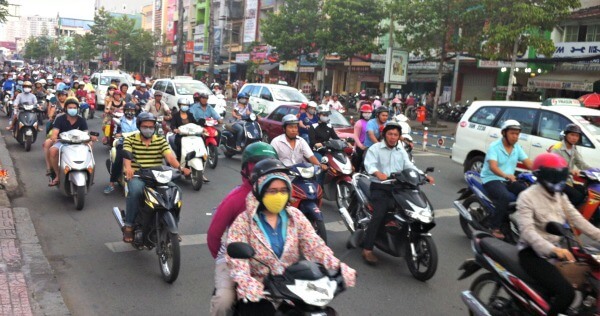 Randomly, around 3/4 minutes later of us trying to brave the road, one of our friends who was in the city for the wedding pulled up on a motorbike cool as anything. He jumped off, said his hellos and got us across that road quicker than you could say ‘Halong Bay’.

When I was researching Vietnam I read a blog post about how to cross the road in Ho Chi Minh City and shared it with one of my bloggy friends as the most ridiculous post ever, but had I of actually read that post and realised its significance at the time I would’ve saved myself a good four minutes of kerb dithering.

Just look at the photo above – the roads are crazy, but you just have to go for it. Families riding 5 to a bike would not be able to stop for your indecisiveness so once you’ve connected flip flop to floor, you go.

So long as they’re not on a motorbike the Vietnamese people were super friendly – it surprises me to hear stories of anything else. Our stay at the Ruby River Hotel at the end of our trip was perfectly timed and at some points there I worried that the staff actually did think we were celebrities.

The price of Vietnam

The other thing that shocked me about Vietnam was the price.

“That was less than FIVE POUNDS”

I was forced to whisper in disbelief after every meal. My boyfriend would tell me off if I did it too loud. You could get a two-course, two-drink meal for two for well under a tenner in the restaurants, a fiver if you hit up the delicious street food. Vietnam is so cheap for a salaried Londoner, it’s awesome. 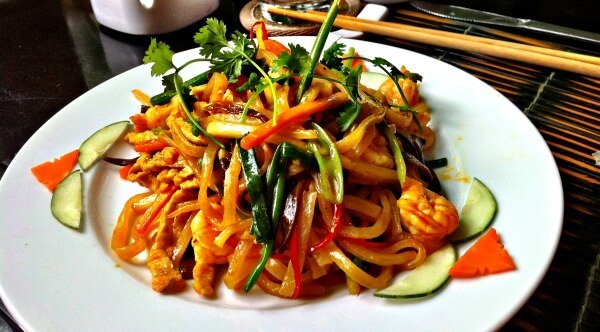 Our accommodation was never more than £8 each per night and find the right place and beers were just 15p. Once you’ve paid your airfare there Vietnam really is ridiculously cheap. My parents went to Greece at the same time and spent far more in a week, including flights, than we did in two in Vietnam.

Transport in Vietnam was really easy to navigate and getting around was simple. I was too sensible/weedy to get on a motorbike, but the planes and trains in Vietnam were awesome.

One of the main reasons I’d have no hesitation in recommending a trip to Vietnam would have to be the food. The Vietnamese cuisine is amazing. It tasted pure, filled with good quality ingredients and it was obvious a lot of love went into making the delicious fare.

Just one thing to note; step out the solace of the hotel air conditioning and onto the dirty street and the sweat comes to surface like a rabbit out of a warren. Take a few spare tshirts, trust me.

I felt safe in Vietnam. The only time I was a little iffy was walking home at 1am one night and we saw two huge rats on the side of the road, but I clapped them away quicker than you could say rat attack.

My bravery may have been because I was travelling with my boyfriend, a stocky-looking guy, although it was eventually only the lads in our final group of around 20 who had a story to tell. These included such highlights as lady boys flirting with you and then going in for the balls while another one stole your wallet. Another involved the old tried and tested chestnut of flirty girls ordering drinks and chatting you up, only to leave you with a fat bill at the end that you have no choice but to pay. 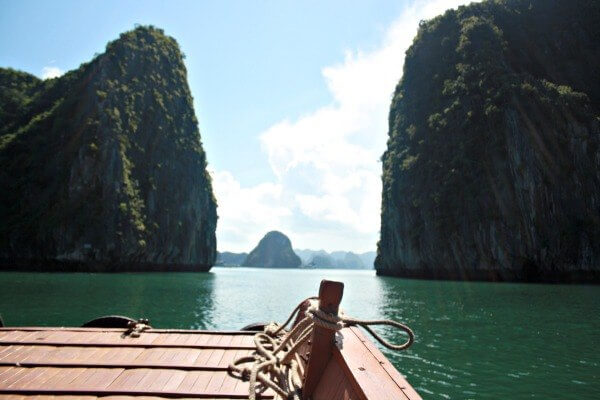 Every time we left the hotels we’d have the staff telling us to be careful with our belongings. But we were fine. The only problem me and W. have travelling together is the fact that because he’s black and has dreads everyone assumes he’ll be well into his drugs. Quite the opposite. There was this one man who would not leave us alone on the final Friday night; I had my fan in my hand and eventually had to turn around and sternly tell him to go away putting on my best angry face and wagging my fan at him like it was a long finger. Another woman came up to us outside a restaurant and tried to press a block of resin into my hand. I literally screamed and backed away. It was the week those two girls in Peru were dominating the news for drugs abroad and I was super paranoid.

The atmosphere in all of Vietnam was fun and relaxed – unless you went near a road of course. Walk down the streets and they were lined with locals and tourists alike sat on tables and chairs enjoying good food and a drink. The street sellers did get a bit annoying, especially when we were sat in a group of ten westerners outside a bar in the most touristy district. But y’know, they’re only doing their job and promoting their wares, it’s the way they roll over there. Compared to the likes of other markets around the world that I’ve been to everyone was chilled in the bazaars, all except for the clothes section of the Ben Thanh Market where it was like running the gauntlet on the Gladiators to get past them. They’d try anything to get you in their shop, and not opposed to a bit of a grope.

If you want a relaxed shopping trip head to Hoi An, for crazy party life with other backpackers go to Nha Trang (and try the egg baths), for the big city life go to crazy Hanoi and HCMC and for the most beautiful place in the world get yourself to Halong Bay. To experience it all follow my two-week Vietnam itinerary.